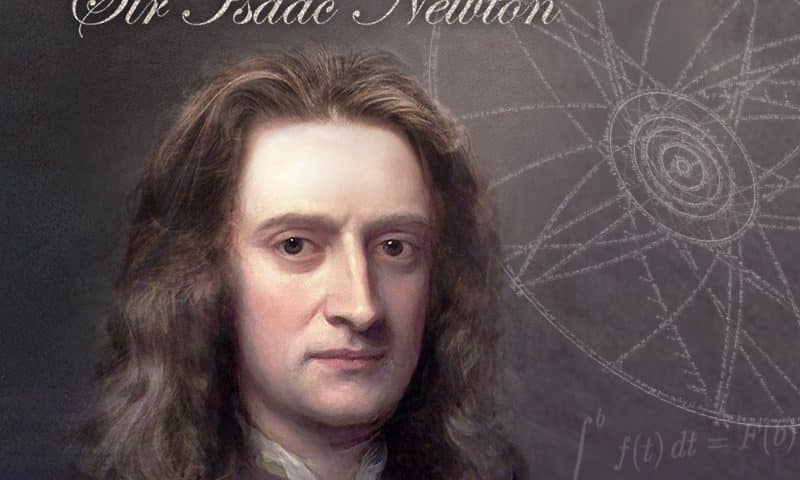 Newton was a Christian, an alchemist, and only then a scientist. This order reflects the time, and the intensity, with which he pursued his projects.

Newton was an alchemist obsessed with ancient knowledge. He believed that the ancient Egyptians possessed mathematical and astronomical knowledge that was far superior to knowledge in his day, and believed his own work merely rediscovered this knowledge. He also believed that they had knowledge of esoteric matters that went beyond conventional science and mathematics, and spent tremendous effort attempting to rediscover these. Most of his biographers have tried to cover this over, and it is only recently that a fairer appraisal has begun to surface.

Newton was a Christian, but not a Christian out of convention. He was not a Christian merely in order to fit in or to conform. In fact the branch of Christianity he chose was highly controversial and delayed his career in the early years rather than helping it. He was a Christian because he found his own somewhat unusual Christian position to be philosophically and scientifically cogent. It was the investigation of Christianity, and not science, or even alchemy, which held his attention until the last years of his life.

An understanding of Christianity was the one thing that Newton pursued from the beginning of his life to the end. He eventually tired of the study of both science and alchemy, but he continued to study Christianity and to attempt to unite it with the physics that he had given the world, right up to his death.

In the matter of religion, as with science, Newton was not content to accept convention, but was compelled to investigate matters for himself.

The Christianity he preferred was the unconventional position of Arianism, and this may have been what prevented him from writing more strongly on the subject in public. He appears to have found Arianism to be intellectually superior, and was loyal to it despite the danger that this unconventional position posed to his career, and even to his personal safety.

Newton’s Arianism had been the preference of his mother, in the small Lincolnshire village in which he lived his childhood and early teenage years. Newton spent many years creating unpublished theological defences of Arianism, believing it to be the true Christian theological doctrine. He scoured the pages of the Bible for evidence of Arianism in its text.

At the end of his life he attempted to combine his science and his theological ideas into a single theory, a “theory of everything” that he had sought in physics and chemistry, but failed to find there.

The laws of the motion of objects which Newton described using equations were to become the cornerstone on which the modern understanding of the world was built. But for Newton they were nothing more than a tangential interest, or a piece in a larger jigsaw. Newton published two major and lasting scientific theories. His theory of gravity, which held centre stage in physics until it was partially supplanted by Einstein’s views on gravity in the early twentieth century – and his theory of light, in which he proposed the modern understanding of light as particles which survived until supplanted by quantum theories of light in the mid twentieth century – were his two most influential contributions to science. They were summarised in his two classic works, the Principia Mathematica and the Optics.

The most famous, the Principia, unified the work of Galileo and Kepler into a single mathematically coherent and experimentally demonstrated whole which defined the laws of gravity and applied them to describe planetary motion. It was this which made possible the industrial revolution by supplying the laws of mechanics that would make possible 18th century automation. The Principia was a culmination of 20 years of labour, millions of words of note taking, and several previous less well known books.

But investigation of how the physical world worked was merely one aspect of what motivated Newton. He saw everything in the world as a divine secret to be unlocked. In fact science was a relatively small part of a larger spiritual quest. In comparison to alchemy and Christianity, science was the lesser of his concerns. At certain times in his life it also took a back stage to his political and legislative commitments.

Newton’s alchemical writings were largely reserved for notebooks, a large number of which were destroyed in a fire at his quarters, or were published and distributed under the pseudonym of “Jeova sanctus unus” meaning One Holy God, across secret alchemical societies in London and Europe. Alchemy was considered to be something of an occult art and was treated with suspicion in an age which still feared witchcraft. Nonetheless even the small amount of his alchemical writings that remains is much larger than the full collection of his scientific notes. This itself speaks volumes about the priority of his interests.

In order to appreciate Newton, it is necessary to get a feeling for what alchemy actually was. Most people would describe it as a protoscience, which combined numerology, prophecy, astrology and other occult arts with the beginnings of scientific chemistry and astronomy. This much is probably true, but alchemy was often much more than this as well. It could be approached a spiritual path. The internal transformation of the individual was more important that the transformation of physical substances. Purification of body and soul led to the condition of “gnosis,” in which ultimate knowledge of the universe was revealed.

Alchemists pursued various ends which now seem amusing, such as the manufacture of gold from lead, and it is true that most alchemists were concerned only with the manufacture of gold and with physical riches. Stories, incidentally, abound of alchemists who demonstrated the transmutation of lead into gold through the use of certain elixirs to the astonishment of sceptical overseers; the investigation performed by the previously sceptical philosopher Johann-Friedrich Schweitzer in 1666 is one well-known example.

Regardless of the truth or falsity of any of these claims, the parallel strain of alchemy was entirely spiritually inclined, and this strain understood the gold that the alchemist achieved as spiritual gold. It was this alchemy with which Newton identified. Knowledge of the physical world was a part of a general rounded development which was ultimately spiritual in nature. The alchemist would eventually achieve the “prima sapientia” – the so called “pristine knowledge” – a spiritual  enlightenment in which the soul became utterly pure, and knowledge of all things was given.

It was this quest , and not physics itself, which was the obsession of the most influential physicist in history, for most of his early and middle life.

Like Albert Einstein, Newton believed that science and God were compatible, and that they could be brought together in a single “theory of everything.” This quest came to increasingly dominate his thinking in later years as Newton sought to unify his scientific theories of the motions of planets and of light with Christianity.

He had begun this to some extent in his earlier and largely scientific work the Optics, in which he offered theories on matters such as the Great Flood and the Creation. But these had largely been scientific speculations as to how the science in the rest of the book might have been applied to these events.

In his later years Newton changed tack, and attempted to completely synthesise science and religion into a single cohesive theory. This work was by no means completed, and he never attempted to publish these ideas, leaving them only in notebooks to be discovered after his death.

In Arianism, unlike most forms of Christianity, God and Christ were not considered equal. God was superior to Christ, God was the source of all and sustained everything, Christ was one step below this. The difference is rather like the difference between the transcendent God of the theology of Thomas Aquinas, and the so called “demi urge” of Gnosticism – a lesser God which was created by the transcendent God and relied on it for its existence.

Theological opinion at the time was divided as to what extent the resurrected body of Jesus was physical or spiritual. Newton became convinced that the body was spiritual, and cited passages from St Paul in support. It therefore became natural to think of Christ as standing somewhere between the physical universe and God, and this fitted with Arianism. Christ was the first emanation of God. Christ depended on God for existence, but gave existence to everything else. Newton came to think of Christ as the ether: the spiritual body of Christ was the backdrop of the universe in which all physical things arose. He used the spiritual body of Christ to address unanswered questions in his theory of gravitation.

Christ or the ether was the medium through which the action of one body on another at a distance was possible. Hence Newton philosophically drew together the scientific theory and his own understanding of Christianity. The theory also allowed for the personal nature of Christ – available to each of us at each moment in line with Christian theology – as Christ was literally located throughout the whole of space and time. Likewise the incarnation and resurrection were neatly (and somewhat alchemically) explained as the transmutation of a spiritual into a physical body and vice versa.

Without getting too deeply into theological issues, we can see that Newton was committed to spiritual investigation to the end of his life. The basis of his religion was not merely “faith alone” – he did not believe in God simply because this was the norm for people of his time as certain atheistic scholars in the present age have lead us to believe – he believed that a theological understanding of the world was compatible with the science he had given the world, and went to lengths to unify the two. He sought, effectively, the kind of “theory of everything” that transpersonal and integral philosophers are still searching for today.

V Conclusion: Science and the occult

It is worth remembering that gravity itself was initially considered an occult subject, for it involved the postulation of forces that we cannot actually see – we can only infer their existence from other facts. Newton’s work was responsible for elevating gravity from an occult to a scientific status. Other aspects of Newton’s Optics continued to sound largely occult even once his physics was accepted: his speculation in the Optics that gravity not only existed but could bend light was one such instance. This idea was not to move from the status of the occult to the scientific for another 300 years, and the emergence of Einstein’s general relativity, which demonstrated to the world that gravity could not only bend light, but could bend space and time as well. Such a suggestion had been beyond the speculation of even the most fervent occultists and mystics of any age!

It is interesting, then, to contemplate the spiritual matters currently considered taboo by today’s mainstream convention-ruled scientists, and what status will eventually be granted to these apparently occult beliefs in the future, as further light is shed on the truth by more adventurous scientists and philosophers.