Completing Piaget's Project is a book on transpersonal (spiritual) psychology, its basically a history of science from a transpersonal perspective that develops lines of thought relating to complex systems biology, and human development through the life cycle. It is also relevant to the field of theistic evolution, suggesting a role for natural selection and genetics in the evolution of human spirituality. View on publishers site. View on Amazon. 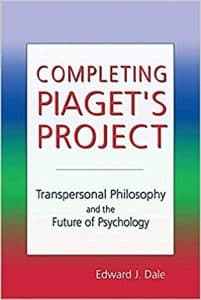 Some of Ed's academic papers on transpersonal psychology/anthropology:

Dale, E. (2014b). Spiritual Consciousness and the Age of Quantity: The Strange Case of Jean Piaget's Mysticism. Journal of Consciousness Studies, 21, 97-119

"This is a dense, demanding, and rewarding read, reframing as it does the seminal work of Jean Piaget beyond its generally perceived atheism.... This is the Piaget unknown to psychology who was also making important contributions to biology, many of which have since been validated by more recent systemic models.... In the final analysis, the spiritual must incorporate the findings of modernity, which the author find plausible largely because of adaptive complex systems theory restoring a sense of directionality to our view of life."