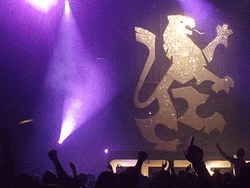 August 2016 saw the long awaited return of the Gatecrasher clubbing culture in Sheffield. The iconic brand name and accompanying strutting lion logo is inseparable from the rise of UK house and trance culture in the late 1990s and 2000s. Gatecrasher stood shoulder to shoulder with Ministry of Sound and C.R.E.A.M. as the UK’s best known clubbing venues, playing to packed audiences around the world, and releasing twenty-seven compilation albums through their record label.

Although Gatecrasher will forever be associated with Sheffield it actually originated in Birmingham. Similar styled nights abounded in Birmingham in the 1990s and the brand’s owners moved to Sheffield, a city perceived to lack an adequate high quality clubbing venue. Gatecrasher found temporary homes at Sheffield’s Leadmill, The Arches and The Adelphi clubs before moving to The Republic on Matilda Street in 1997 with the ever so appropriate postcode of S1 1DJ. This became their permanent home, becoming the primary clubbing venue in Sheffield, offering all night events with Judge Jules as resident DJ. The Republic was eventually renamed “Gatecrasher One.” The club was noted for the spectacular laser equipment, the famous triple DJ booths, the Electric Box and VIP Pod sections, the balconied main room, and the iconic raised walkway.

It was here that Gatecrasher broke away from the crowd, established its own unique blend of clubland magic, and ultimately gained legendary status. Big name DJs brought the best of house, trance and techno to a growing army of followers – so called “Crasher kids” clad in luminous attire. Eccentric and extreme dressing became their hallmark. People were regularly turned away for no obvious reason, with only flamboyant clothing and appearance seeming to guarantee entry. Nonetheless people were prepared to travel from across the UK every weekend to que around the corner in the cold in bikinis and feather boots. Despite a capacity of 1350, over 1000 were regularly turned away, and at its peak Gatecrasher claimed to have turned away 2000 people in a single night.

As with so much of the UK club scene, associations with spirituality and religion were commonly made, and not just by journalists and academics, but by those who were there. In the words of one clubber who travelled from Glasgow for the event, "It felt euphoric. I can imagine it's something similar to the euphoria experienced in a number of religious ceremonies where the commonality with your peers and the all-encompassing wall of sound sweeps you away. You're left with a residual longing to experience it again and a closeness to those who were there with you." 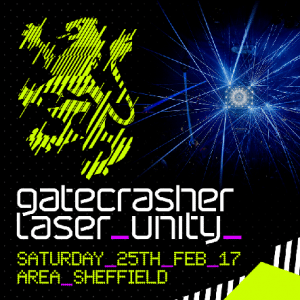 Above: The world famous Gatecrasher lion on a flyer for a 2017 Sheffield event

A crowd of 25,000 gathered for The Millennium event at Don Valley Stadium. The following year the Gatecrasher record label was launched producing compilation albums of club favorites. In a few short years the Gatecrasher culture had become a global phenomenon. Tours of Gatecrasher DJs took place across Europe, Australia, Singapore, Japan, Taiwan, China, Malaysia, and Hong Kong. Large numbers of local fans, with identical attire and hairstyles to the Sheffield “Crasher Kids,” appeared wherever they played.

But the dance music scene now unfolded in a growing atmosphere of hostility, derision, and fear from powerful elements of wider society, driven by an increasing media frenzy over the use of mind altering substances such as ecstasy pills which had become increasingly common in UK sub-cultures across the 1990s.

In May 2001 one hundred and sixty officers in body armor with a team of sniffer dogs burst into the Sheffield club unannounced. Searches of clubbers lead to the arrests of 13 people, before the 800 clubbers were ejected.

The police were shocked by the extent of what they found. Police superintendent Steve Hicks commented, “There were bags all over the floor, it’s the first time I have ever seen anything like it, the place was awash with drugs.” Subsequent raids on homes in Sheffield, Mansfield, Middlesbrough, Staffordshire and East Anglia brought in further vast halls of drugs along with weapons including pepper spray, body armor and an extendable baton.

Police accused staff of being complicit in allowing drug use. Chief Inspector Martin Hemingway who lead the raid into club stated that the club had dodged responsibility towards drugs for many months, and that drug searches by club doormen on entry consistently failed to confiscate as much illegal substances as expected for a club of that size.  He said, “It was a patronizing relationship where they would be pleasant and friendly with officers, but it was lip service and they continued to run the business exactly the way they wanted.” 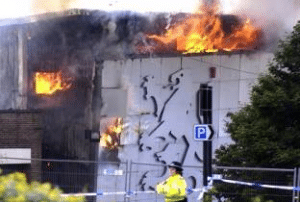 Above: The final hours of Gatecrasher One

But worse was to come for the feted club. On the 18th March 2007 a fire started and ripped through Gatecrasher One. The blaze was huge and the smell of smoke was reported across Sheffield. A swirling grey column rose over the city while residents were warned to keep windows and doors closed. The club was ruined. One end of the building completely collapsed and it was eventually demolished. Somewhat appropriately, the source of the fire was traced to the DJ booths, though its precise cause was never determined. The club was packed with flammable décor and upholstery. Rumors abounded at the time that – in the atmosphere of growing media and police scrutiny – the company had found their own way out before they were pushed. (These rumors were never proved.)

The reaction was extraordinary. A crowd of tearful onlookers gathered at the scene of the fire. A few days later a wake was held for the death of the beloved club. Make shift signs, banners, and even flowers adorned the site,  “RIP you will always be with us,” read one. “The music, the lights, the spirit of the people. We will always remember you,” read another. “Gatecrasher will never die” was spray painted on walls and chip boards around the city.

The down-turn in fortunes for Gatecrasher marked the beginning of a movement away from superclub culture. Certain venues, including Gatecrasher’s venues in Birmingham and Leeds, were marred by violence, as all-nighter events became more mainstream.

In 2011 Gatecrasher Seven in Leeds was temporarily closed following a violent incident between two groups of customers. It was reopened in 2013 and the management convicted of selling counterfeit alcohol. Gatecrasher’s Ibiza venue, opened in 2014, became insolvent within a year. In 2015 Birmingham’s two thousand capacity Gatecrasher club was shut down following a brawl between security staff and a group of customers in which one customer was stabbed in the leg.

The original site of Gatecrasher One has now been redeveloped into student apartments, but the name has been maintained – “Gatecrasher Apartments” – and the apartment block logo was designed to resemble a vinyl record.

But true legends never die, and this is one that won’t go away in the flesh either. Less than two years after the last venue shut down, the brand found new financial backing and made a spectacular return, initially at Sheffield’s Kingdom nightclub. Further successful events followed, and Gatecrasher was once again putting on spectacular nights of a quality to rival the golden age of the late 90s.

Gatecrasher events are growing at a rapid rate in Sheffield on a monthly basis, while attempts are made to buy a permanent venue, and establish a new era in the UK club scene.